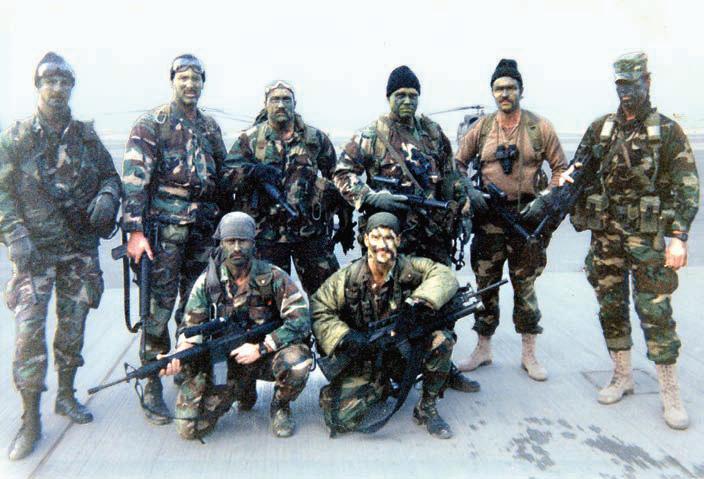 The training kicks in.

Take a second to think about what made you stressed or anxious last week. Deadlines, traffic, a long grocery line, or some social situations are everyday trivial stressors, but your brain’s amygdala processes them as life-or-death threats.

Stress just means resistance or pressure. We need stress to grow as humans; it can be a positive force if mentally framed correctly — even enhancing performance to blast through a deadline. But prolonged stress erodes your performance and wellbeing.

Through my long history as an elite athlete, martial artist, yogi, and Navy SEAL, I teach people how to conquer fear and anxiety, and help veterans with post-traumatic stress.

Here are six ways I learned how SEALs starve fear and feed courage:

1. Positive self-talk.
SEALs are trained to be rock steady, but when I checked into initial SEAL training, BUD/S Class 170, my nerves were sizzling. Adrenaline pulsed through my arteries. My class of 180 trainees had a stream of negative chatter in their minds expressed as anxiety riddling their faces. A sign on the wall said, “The Only Easy Day Was Yesterday.”

I paused and said to myself: “I’ve trained hard and made it this far. Many have gone before me and survived — if they did it, so can I. Quitting is not an option. They’ll have to kill me to quit. Just focus on performing right now.” This perspective melted my fear to be replaced by the firepower of courage.

2. A “Why” or purpose.
Two hours into the first day of training, trainees were already quitting. While doing push-ups in the surf, my buddy Bush — who’d outperformed me throughout Officer Candidate School — said, “Mark, I can’t do this,” and also quit. I later discovered that he wanted to be a vet. His “Why” for being a SEAL wasn’t steadfast.

During Hell Week (six days of training with just four hours of sleep), an instructor told me, “You’re capable of twenty times more than you think.” At the end of my nine-month BUD/S class, 19 trainees remained. The workload we endured seemed impossible. But, amazingly, it was. Our “Why” enabled us to tap into our 20X Factor and an uncommon resolve.

3. Focus on the immediate threat.
One year later, in the pitch black, my parachute canopy collapsed into a wobbly sheet after a teammate collided with me in mid air. Plummeting towards the earth, I had eight seconds remaining in my 26-year-old life.

Suddenly my training kicked in. My mind, breathing, and time slowed as I felt my way through the malfunction checklist. Suddenly my reserve chute caught enough air before I hit the ground unscathed.

Despite the chaos, a SEAL is trained to focus with single-mindedness on the immediate threat and dispatch one target at a time. Excessive thinking would have killed me. My unconscious competence combined with relentless training saved my life.

4. Breathe.
Two hours into my five-hour diving mission, water gushed around my face. I could breathe but was blind. I fumbled through the standard operating procedures to clear the mask but to no avail.

I was useless as a navigator but couldn’t abort the mission. My teammate took over. After my frustration and fear had dissipated, I slowed my breathing and held my breath at the inhale and exhale. I focused my mind on the breathing cycle while repeating the positive mantra, “Feeling good, looking good, ought to be in Hollywood!” thus accelerating my concentration and positivity.

Suddenly we came to a halt. We’d arrived at the destination. A miserable three hours felt like an enjoyable 45 minutes just through focused breathing.

5. Visualize success.
When my mentor, Admiral McRaven, led the mission to nail Bin Laden, he had his SEAL Team visualize the mission hundreds of times. They mentally pictured everything that could go wrong, as well as what the victory would look like. They also rehearsed it live in a mock-up of the compound the terrorist was holed up in. This tactic is a key to SEAL success.

SEAL’s don’t take anything for granted and ensure that they win in their minds before stepping onto the helo. The SEAL Platoon will “dirt dive” a mission to visualize every part of a mission before executing it. Visualization focuses their mind on what they can control and identify challenges. It inoculates fear because they’ve replayed all the scenarios, yet are highly trained to adapt to unforeseen events. When things inevitably go wrong and fatigue kicks in, they fall back on their visualization and training.

6. Quitting is not an option.
As a retiring SEAL, I wanted to give civilians or special operations candidates a taste of the training I’d experienced.

49 hours and 45 minutes into Kokoro camp — a 50+ hour crucible modeled on the SEAL Hell Week — we turned up the heat to see how trainees would withstand the pressure. After convincing the trainees that several hours remained, one quit. Moments later, the class was secured, and he was left dumbfounded.

The SEAL ethos makes quitting not an option. SEALs persevere to “find a way or make one.” Things inevitably go wrong, but they don’t entertain the concept of failure. In high stakes situations, quitting means mission failure, even death.

To conclude: developing a warrior mindset makes you approach life’s challenges differently. You’ll face them head on, keep goals short, but stay focused and relaxed, adapting to the changing situation. You’ll look to find humor in the challenge and tap into your 20X potential. You’ll know that you will succeed — with the right training, there will be no wondering.