MARSOC: Thriving in an Era of Uncertainty

MARSOC: Thriving in an Era of Uncertainity MARSOC: Thriving in an Era of Uncertainty, Written by: J.R. Wilson on December 24, 2011 http://www.defensemedianetwork.com/stories/marsoc-thriving-in-an-era-of-uncertainity/ Although the U.S. Marine Corps Forces, Special Operations Command celebrated its fifth anniversary in February, MARSOC traces its modern heritage to the Marine Raiders of World War II and Force Reconnaissance Marines, established in […]

U.S. Navy SEAL Teams from Establishment through Operation Urgent Fury: 1962-1983 Passing on a good history of the early Teams from Dwight Jon Zimmerman.  This is the 50th year anniversary of the SEAL Teams from their birth out of the UDT and NCDU of WW2 and Korea era in 1962.  Best wishes to the whole […]

http://www.defensemedianetwork.com/stories/origins-and-evolution-of-u-s-navy-seal-teams-1942-1962/ Origins and Evolution of U.S. Navy SEAL Teams: 1942-1962 Written by: Tom Hawkins on December 26, 2011 Most of us woke up on the morning of Aug. 6, 2011, to learn the devastating news that our nation had lost 17 courageous U.S. Navy SEALs along with five other Naval Special Warfare (NSW) personnel, Air […]

This morning, in our Warrior Yoga training, we had a discussion about creating space in your mind.  What does that mean? Oh how I would love to rewind the clock and have a “do-over” of a few significant events in my life where things did not go well.  The primary reason the thing, whatever it […]

So you wanna be a Frogman?

Check out this new video where Coach Cerillo (SEALFIT Certified Partner) Crossfit Bellvue and his trainees demonstrate the intensity and commitment involved in a SEALFIT workout. Quitting is not an option. Learn more about Coach Cerillo and our coaching staff  on our About Us.

K.I.S.S. In the SEALs we have a saying “keep it simple, stupid.” KISS is a mandate to steer away from over-complicating things and instead seek the simple, easy to execute solution.  Simplicity is a powerful principle that allows us to channel our energy like a laser beam and avoid getting stuck in the rut of […]

Staying Centered during the Holidays

The holidays are a time to power off the laptop, take some well deserved time away from work and spend it with family – if you are so lucky.   But so many in service to this country will be missing another holiday, far from home.  If this is you, thank you.  We know you […]

Are you a risk taker, a Pioneer?  If yes, then you will want to take a look at the new Unbeatable Mind Academy, our online program for developing mental toughness and a warrior’s spirit.  Feedback has been exceptional. For the past two weeks I’ve offered a Pioneer rate of $47a month to loyal members of […]

What wolf are you feeding? 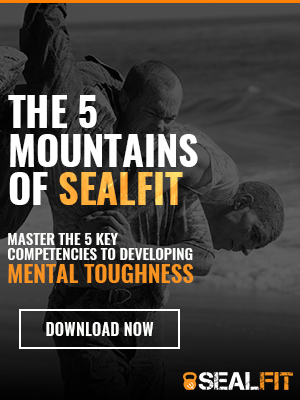